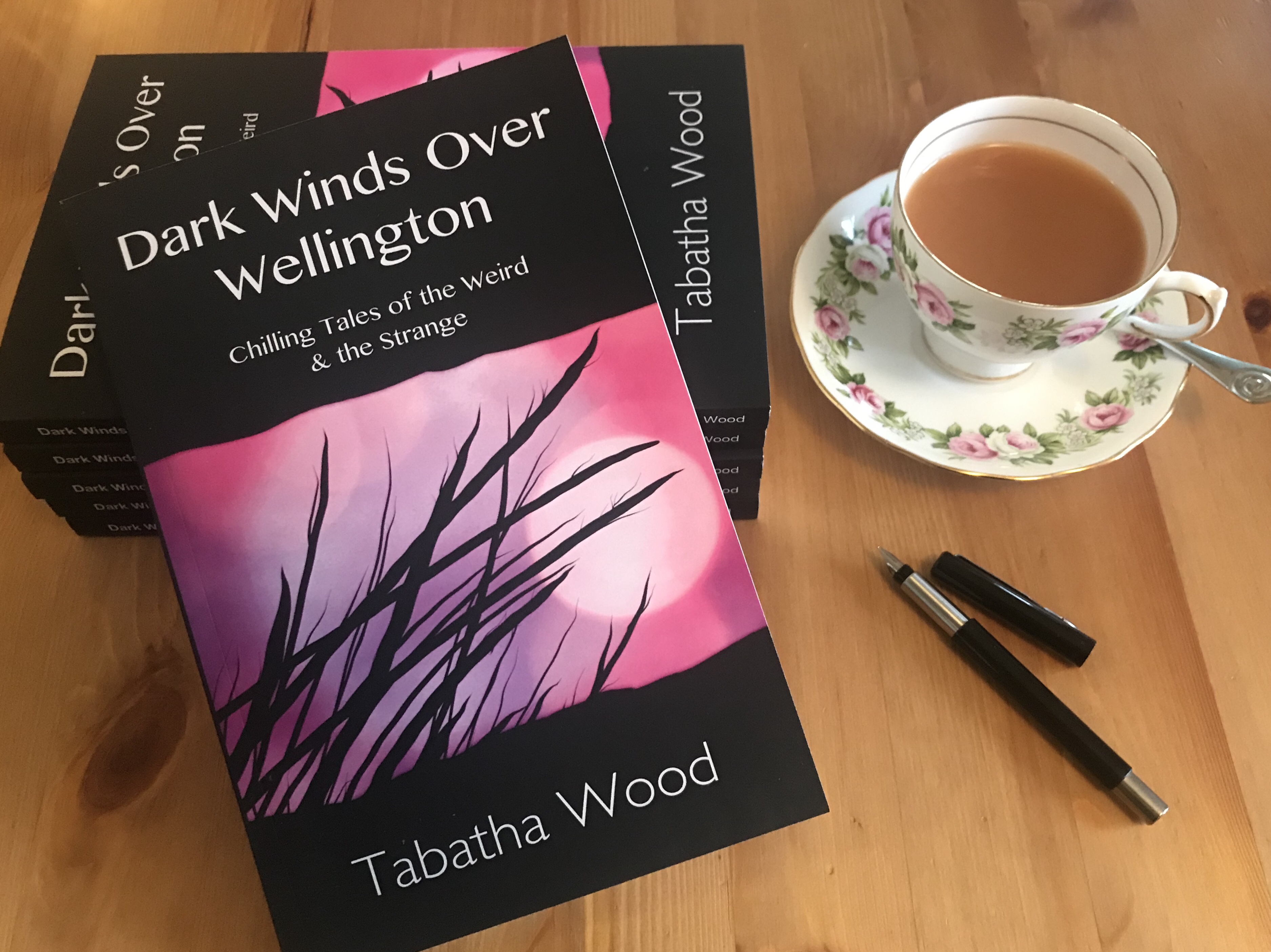 I woke up this morning to find I had been tagged in an awesome yet terrifying tweet — a friend of mine had included me and my anthology, “Dark Winds Over Wellington,” in a list of must-read female dark fiction writers. I’ve read all of the other books she listed and they are absolutely tremendous. Of course my very first thought was: “I don’t belong on this list!”

Why do I do this to myself? Obviously imposter syndrome has a massive influence, but why? I was first published by Continuum Press (now Bloomsbury Academic) fifteen years ago. I wrote three academic texts for teachers; did technical edits and proof reads for Sue Cowley; and contributed to a number of “… for Dummies” titles released by Wiley Press. It wasn’t a huge earner, but it paid enough that I could buy myself a new laptop and it helped to impress any potential employers. If feeling less like a fraud was simply about proving that you can do something, I’ve already succeeded.

But I’ve never felt particularly proud of those achievements. It was simply something I could do, so I did.

I’ve been writing and sharing my fiction since exactly this time last year. September 2018 saw me enter my very first short story contest with the New Zealand Writer’s College, which then encouraged me to start writing and publishing more of my stories. I did it awkwardly, however, and lacking in confidence. I admitted on Twitter the other day that I didn’t have a launch party for my “Dark Winds…” collection, or send out ARCs for reviewers. I didn’t have a sales plan or try to promote it very much at all, and a big reason for that was due to crippling imposter syndrome and self-doubt. Not believing in myself or my work enough to send it out into the world with a flourish and a fanfare, or at the very least a small flag. I thoroughly regret that.

Yet even now when people say they’ve read it and enjoyed it, I find it hard to believe them. “Sorry for any mistakes,” I want to say. “I probably should have paid for a proper editing service.” Or, “I know some of the stories are not as strong as they could be.” I feel awkward and unsure. I convince myself that most people read it and laugh at the preposterousness. “Why on earth did she think that was worth publishing?”

This year so far I’ve released my own anthology and had stories accepted into a horror-themed collection which raises money for charity, and in two horror/dark fiction magazines. I feel excited and also validated by my peers — I feel “seen” for the first time — but there’s also a part of me which still feels like a fraud. I look at the other authors I share page space with and I question if I really belong. It’s so infuriating!

The idea that you can have a laundry list of accomplishments and be highly regarded by your peers and still feel uncertain about the standard of your work completely fascinates me. When does it end? Does it ever?

I don’t know how much of these feelings come from bad experiences in my past — times when I felt like my achievements had not been recognised by those whose opinions were important to me. I realise now that those people will never give me their validation, and more importantly, I don’t need it, but I understand why those those feelings still affect me. I wish they didn’t. Perhaps in time I’ll learn to squash them down completely.

I interviewed a pretty famous writer recently who cited shyness as one reason for choosing to self-publish — a writer who has enjoyed a career that spans almost four decades and has written numerous stories, felt too shy to approach a publisher with their work! I was really surprised. I know it’s not unusual, and being that writing itself tends to attract a more introverted type of person, it’s little wonder. Still, the idea that you can have a laundry list of accomplishments and be highly regarded by your peers and still feel uncertain about the standard of your work completely fascinates me. When does it end? Does it ever?

In contrast, I don’t ever want to get cocky or act like I’m entitled. I don’t think very highly of those authors who behave arrogantly or dismissive to their fellow writers. Why would you alienate yourself from the community like that? I believe you can have confidence in your abilities without needing to be an ass about it. I think I’d rather be seen as a good and likeable writer than an outstanding one and a dick. Just my personal opinion.

When someone tells you they liked what you’ve done, or they appreciate your work — listen to them. Believe them.

So, do I belong on that list? Should I really be rubbing metaphorical shoulders with other, much more amazing writers who I believe are way better than me? My imposter syndrome gremlin will growl at me for saying so, but — Yes! Why the hell not? Sometimes people see things in you which you will never see in yourself. Why doubt them? When someone tells you they liked what you’ve done, or they appreciate your work — listen to them. Believe them. Don’t put yourself down, and definitely don’t let others do that to you either.

Every time I forget to “toot my own horn” and to celebrate how far I’ve come, I’m doing myself a disservice. It’s not dumb luck or nepotism or money which has got me where I am, it’s bloody hard work. It’s been constantly chipping away at the marble block knowing something wonderful is hidden inside. It’s reading and writing and learning and listening, and figuring out how to be the best I can be right now, while also understanding that the world keeps turning, the horizon keeps moving, and I can keep on getting better.

It’s not your job to prove to anyone that you deserve a place on that list, not even to yourself.

We all belong on a best-of list somewhere, and it might be a list we feel uncertain or awkward about being included on, but we have to allow ourselves to let those feelings go. It’s not your job to prove to anyone that you deserve a place on that list, not even to yourself. Trust me; if you’re on it, you deserve it. Well done to you.

By a twist of wonderful serendipity I was also reminded of a great anecdote by Neil Gaiman which discusses imposter syndrome. You can read it on his blog here: https://neil-gaiman.tumblr.com/post/160603396711/hi-i-read-that-youve-dealt-with-with-impostor

“Some years ago, I was lucky enough to be invited to a gathering of great and good people: artists and scientists, writers and discoverers of things. And I felt that at any moment they would realise that I didn’t qualify to be there, among these people who had really done things.

On my second or third night there, I was standing at the back of the hall, while a musical entertainment happened, and I started talking to a very nice, polite, elderly gentleman about several things, including our shared first name. And then he pointed to the hall of people, and said words to the effect of, “I just look at all these people, and I think, what the heck am I doing here? They’ve made amazing things. I just went where I was sent.”

And I said, “Yes. But you were the first man on the moon. I think that counts for something.”

And I felt a bit better. Because if Neil Armstrong felt like an imposter, maybe everyone did. Maybe there weren’t any grown-ups, only people who had worked hard and also got lucky and were slightly out of their depth, all of us doing the best job we could, which is all we can really hope for.”